Thank you for purchasing an Axe-Fx Pre-Amp / Effects Processor. You’re now the owner of one of the most powerful instrument processors ever produced. By familiarizing yourself with this manual you’ll be able to reap the full benefits of your unit. Please take a moment to read through the sections that follow and acquaint yourself with the usage of your Axe-Fx.

What is the Axe-Fx? Well, let's start by telling you what it isn't. It's not a modeler in the strict sense. Although it has cabinet emulation and different amplifier "types" it does not attempt to model any amplifier or effect exactly. Rather the Axe-Fx was designed to simply provide the effect as originally intended and with the utmost quality. All effects can be described in terms of their desired sonic manipulation. All effect processors, whether "stomp boxes" or otherwise, process the input signal to get an output signal, simple as that. However, some processors obviously do better than others. The Axe-Fx approaches effects processing as a strict set of specifications and implements those specifications.

For example, the wah effect in the Axe-Fx is not intended to model any of the classic wah-wahs. Instead the input-output relationship of a wah was distilled into a set of specifications. From there the effect was designed to exactly meet these specifications. There is no "black magic" or obfuscation. The effect does exactly what it should do. Inherent in this approach is a degree of flexibility that you do not get with other processors. In our wah example this allows you to set the sweep range, "Q" and other parameters. Most modeling processors do not allow this level of control.

The Axe-Fx’s amp, drive and cabinet simulations, however, are very faithful reproductions of the originals, but without the drawbacks of the originals. What this means is that they sound like the originals but are easier to adjust and provide more flexibility and a wider range of tones. For example, the Brownface amp sim sounds remarkably like a particular classic amp however the Axe-Fx contains working midrange and presence controls. Also the tone controls are much more responsive providing all the tones of the original plus new tones that the original could not achieve. Once again the philosophy is practicality and presenting the “effect” as it was originally intended.

The Axe-Fx does not use any analog processing or any tubes. If you look inside the Axe-Fx you will not see any glowing tubes or any of the revered op-amps that the analog pundits claim offer mystical sonic properties. What you will see are modern, high-quality components that offer specifications and performance far exceeding any of the aforementioned devices.

1. Please do not open your Axe-Fx as damage may occur. Refer all servicing to qualified personnel.

The Axe-Fx does contain, however, very accurate digital replicas of actual vacuum tubes. We gathered up some classic tubes and measured their transfer functions and then stored these transfer functions in the Axe-Fx’s massive brain. Our replicas are so exact that we can reproduce the harmonic spectrum of a real tube amp with amazing accuracy. Most modelers don’t even come close. OK, so what does it do? Well, the Axe-Fx is fully routable, fully programmable, realtime controllable, multi-effects processor. Whew, that's a mouthful. Let's examine each of these attributes:

Programmability: The Axe-Fx allows extensive programmability of each effects parameters. You are not constrained by the limitations of "one-knob" processors where little if any editing of parameters is offered. In addition, many effects offer advanced editing capability allowing in-depth programming. Usability has not been sacrificed though as most effects have a basic setup page allowing quick access to the most used parameters.

Controllability: Many of the parameters in the Axe-Fx are controllable in real-time. Both internal and external controllers can be attached to various parameters offering dynamic control of an effect. Additionally these controllers allow mapping the control value to the effect parameter through a transform so even greater control is afforded.

Multiple Effects: The Axe-Fx has all the classic effects plus a few new ones. And for most effects you get two instances so you can really create some huge sounds. The Axe-Fx works on the principle of an "effects inventory". You take an effect out of inventory and place it in the routing grid and then connect it to other effects and connect controllers to it (if desired). If an effect has multiple instances you can withdraw another instance of that same effect from the inventory and place it at another location in the grid.

The Axe-Fx works on the concept of an effects inventory and an effects grid. 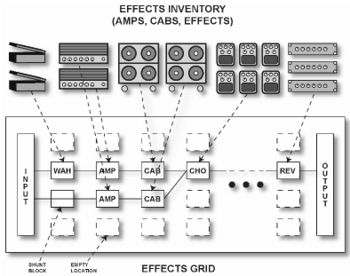 The effects inventory is a virtual stockroom of effects. Effects are removed from the inventory and placed into the effects grid. The grid is a four row by twelve column matrix. Once an effect has been placed in the grid it can be connected to any other effect in an adjacent column. Routing beyond the adjacent columns is not permitted. Figure 1 shows the conceptual model along with a somewhat simple routing. The input feeds the “WAH” block which feeds an “AMP” block which in turn feeds the “CAB” block, etc. A second series path has another amp and cab and this path is added to the first path at the input to the chorus (CHO). Signal flow is always left-to-right. We’ll cover routing in more detail later.

Every effect has a common input-output structure. The input sums the outputs of the effects that feed into the effect. Each effect can have up to four inputs from the previous column. In turn each effect can feed its output to up to four effects in the subsequent column. 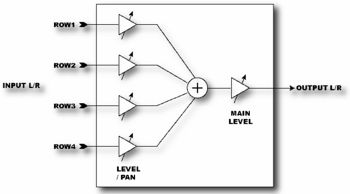 The effects inventory is listed below along with the feature comparison of the Axe-Fx and Axe-Fx UltraTM:


Despite the huge arsenal of effects at your disposal, the Axe-Fx first-and-foremost emphasizes sound quality. Unique to the processing in the Axe-Fx is our proprietary natural processing algorithms. Many of the algorithms in the Axe-Fx replicate patterns that occur in nature (this is where our company name was derived from). The reverb algorithm replicates the sound of a real room, the chorus and flanger use special variable delay algorithms that are more natural and smooth that any pedal (analog or digital) could ever achieve and the amp simulations use unique, dynamic, non-linearity generators that produce smooth, even-ordered harmonics giving a depth to the sound that other processors lack. Almost all the effects in the Axe-Fx are full stereo (except for the Amp, Drive, Pitch and Multi- Delay effects) allowing for rich, full-sounding signal chains. And by using two Amp blocks you can achieve a true stereo, dual-amp rig for really huge sounds.

Along with our superior algorithms the Axe-Fx uses the finest quality components available. The op-amps, A/D and D/A converters and passive components are all of the highest quality. The converters are the same converters used in high-end studio equipment costing many thousands of dollars. A single op-amp in the Axe- Fx costs more than all the op-amps combined in many “budget” processors.

Additionally our unique analog topology eliminates any electrolytic capacitors from the signal path. Only high-quality film capacitors and precision metal-film resistors are used in the signal path assuring low-noise and low-distortion performance. These features also allow the Axe-Fx to excel as an general purpose outboard processor for studio and live use.