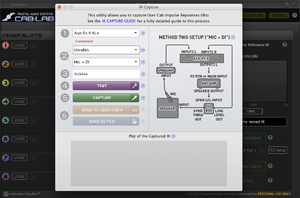 About guitar speakers and microphones

Read this: Guitar speakers and microphones

The process to capture an impulse response is explained in the IR Capture Guide. The Axe-Fx III Owner's Manual contains an updated version of this guide.

"The quality of the power amp isn't really that important. As long as the response is flat. The Axe-Fx does some fancy math and removes the distortion from the measurement. Most solid-state power amps are very flat, their distortion performance is usually where they vary." source

"Mixer is not so important. The IR capture algorithm in the Axe-Fx removes any distortion from the measurement so even a cheap pre is fine. The mic, however, is definitely important." source

"What an IR won't capture is any speaker distortion and speaker/guitar interaction differences. Speaker distortion is mostly irrelevant though since it is typically much less than the amp distortion. Furthermore, we simulate it anyways. Speaker/guitar interaction causes reinforcement of bass and low mids so playing through a cab at moderate to high volumes will sound slightly different than playing through the IR and listening through monitors or headphones. This becomes more prevalent at higher gains because there is more reinforcement at higher gains (this is why you can get controlled feedback easier at higher gain). The difference is so minute though that it doesn't really matter. It cracks me up that people nit-pick about minute differences when those differences are minuscule in comparison to the difference between the response of two monitors (even two of the same brand and model). You can compensate for the difference in interaction by putting EQ before the amp block and boosting the bass and low mids slightly. Or use big monitors and crank 'em." source

"The best way to capture an IR is to use the Axe-Fx itself. It employs several tricks that result in higher-quality data." source

How to capture an IR

The process can be conducted using Cab-Lab or from the front panel of the Axe-Fx II or III.

"The method used to capture IRs is set in the Global menu. Mic Only is the traditional method and uses a single input into Input 2 Left as the response from which the IR is derived. Mic + DI uses both Input 2 Left and Input 2 Right. The mic response (i.e. preamp output) is input into Input 2 Left as usual while the output of a DI box (or DI output on an amp) is input into Input 2 Right. Both responses are captured and the response from the Right input is used to correct the response from the Left input. This accomplishes the same thing as using Reference Compensation in Cab-Lab but is done at capture time rather than during post-processing. The advantage to the Mic + DI technique is that it allows almost any amp to be used. A flat, solid-state amplifier is not required. Any amp, whether solid-state or tube, with or without integrated preamp can be used. For example a tube guitar head can be used as the “power amp”. You can even plug right into the front of the head (as opposed to using the power amp input or effects return), even if the head is set to heavy distortion. The unique capture technique of the Axe-Fx removes any distortion from the measurement and completely separates the amp response from the speaker response yielding a pure and accurate IR. To use the Mic/Line + DI method do the following:

Superior results may be obtained using the line out of an attenuator with the attenuation turned off, because the frequency response will typically have more low frequency extension than common DI boxes.

Some amps have DI or slave outputs that are simple resistive dividers and work great for this purpose. These include:

The Processing parameter selects between “Minimum-Phase” which transforms the IR into a minimum-phase version, “Auto-Trim” which removes the leading silence, and “None” which applies no processing at all. Note: prior firmware always used minimum-phase processing. More information

Delay Compensation allows compensating for time-of-flight delay when capturing IRs. For example when capturing far-field IRs there may be significant time delay due to the distance of the mic from the speaker. This can reduce the precision of the measurement if the delay is excessive. To use the compensation configure the graph to the Time display. Do a test sweep and note the waveform delay. Dial in the desired amount of compensation delay and repeat as necessary. Note that the speed of sound is roughly 1 ft/ms so a mic that is 10 ft from the speaker would incur roughly 10 ms of delay. Note that IR Capture Utility will automatically compensate for delays up to approximately 20 ms (1K samples). Correction is only required for delays greater than 20 ms.

Fractal Audio's LB-2 can be used as a DI for capturing IRs. Read this: X-Load load box

Other suitable DI boxes for capturing IRs include:

How to Choose the Right Direct Box (DI)