"Using a "neutral" IR with a simulated mic does not sound the same as an IR using that mic. It simply can't. Neutral mics like the Earthworks TC series are nearly omnidirectional. They operate by using a very small aperture as compared to traditional mics that have effective apertures orders of magnitude bigger." [1]

"The mic I've been most impressed with for recording guitar lately is the Beyer M160. I don't like SM57's alone for amps. They're too spikey and compressed but mixed with an M160 or R121 they add some nice sizzle." [2]

"My typical workflow is to choose an R121 or M160 first as these have the best low end. Then I choose an IR from one of the other mic types to get the desired brilliance. This is usually an SM57 or 4047. I just don't like 906s or 414s but that's me. I leave the panning at default but that's just my preference." [4]

"Certain mics like the royer 121 have 2 sides (front, back). Each has a different sound. Back side of the R121 is a bit darker. The difference between the front in the back is only apparent at closer mic distances. Get out past 3 feet and the sound the same on either side."

"The M160 is a good mic but there are better ribbon mics. My personal favorite is the KSM313. It's more balanced and has better high frequency response. I haven't tried the KSM353 yet but I imagine it's even better. [7]

Dialing in Your Tone by Red Wirez provides useful info about mics and mic positioning.

From "The SOS Guide to Live Sound" by Paul White: 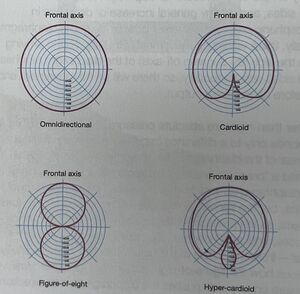 Impulse responses reproduce the sound of a speaker cabinet. Here's some background information on guitar speakers.

"Break-in is definitely real with guitar speakers. The surround is stiff when new due to the doping. I don’t think monitors and hifi speakers exhibit any significant break-in." [9]

"We witnessed speaker break-in first-hand when shooting IRs. We bought a brand-new 5150 III cabinet. Went to shoot some IRs and they sounded terrible. So I put the synth block on and ran the speaker for several hours while we were doing other stuff. Came back and shot some IRs and they were much better sounding." [10]

How a speaker works: electricity runs through the voice coil (wire), creating an electomagnetic polarity that shifts depending on the input signal. This makes the coil move closer or away fom the magnet.

From "The SOS Guide to Live Sound" by Paul White: 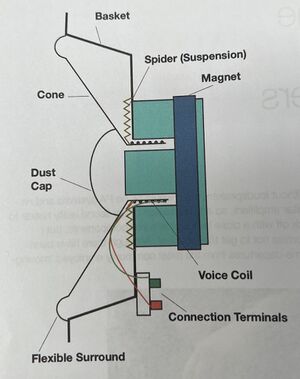