The Multi-Delay is a rhythmic delay block with eight sub-algorithms: Quadtap delay, Plex Delay, Plex Detune, Plex Shift, Band Delay, Quad-Series, Ten-Tap and Rhythm Tap. Delay times can be controlled by tempo allowing for rhythmic patterns to be easily created. All delay lines can be modulated by up to four LFO’s. 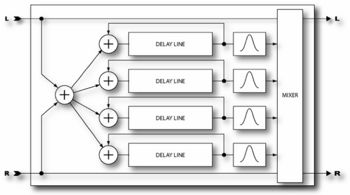 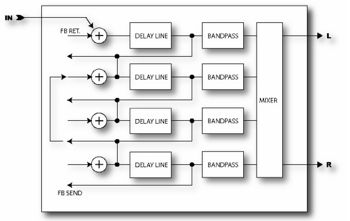 more discrete whereas a high setting will tend to smear the echoes.

2. Set times to half original value.

The Ten Tap Delay is a special kind of delay that allows you to precisely control the repeats. It is implemented essentially as 10 delays in series. You can control the exact number of repeats, up to 10, along with the decay, level and panning.

The Diffusor is comprised of four two-second diffusers in series. A diffuser smears transients and can be used as a type of reverb for creating interesting ambience effects.

the tempo is set to a quarter note (1/4) then the time will be 500 ms (one echo per beat). To ignore the global tempo set the tempo control to NONE.

The Multi-delay block doesn't allow spillover. If you want spillover, use the regular delay block instead.

This article is a stub. You can help the Axe-Fx Wiki by expanding it.
Retrieved from "https://wiki.fractalaudio.com/gen1/index.php?title=Multi-delay&oldid=1332"
Categories: