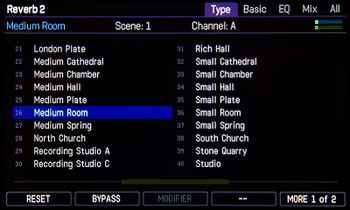 Added dedicated Pitch Shifting to the Reverb block. This can be used to create “Shimmer Reverbs” easier than using separate Pitch and Reverb blocks (and with less CPU usage). Several new types are included to demonstrate the capability.

On the FM9, the two Reverb blocks run in a dedicated DSP core, without much of an impact on the the overall CPU usage. But features added to the Delay and Reverb effects can overtax the effects’ processor in extreme use situations. Therefore, when viewing a Delay or Reverb effect editing GUI screen on the FM9 hardware, a CPU meter will appear on the display if the cpu usage moves past 75%. As with the primary effects core, the recommended maximum cpu use value is 80% to ensure best performance.

When importing presets created on the Axe-Fx III or FM9 into the FM3, Reverb is automatically set to Economic Quality.

Cooper Carter: Reverb Quality Settings - Can you even tell the difference?

Adjusting the size parameter will causes artifacts. Always has. Don't adjust it while playing. [24]

"It requires a lot of calculations to change the Reverb time which is what Hold does (it increases it to a couple hours or something). If CPU use is high the calculations won't finish during one block which results in a click." [25]

"When activating reverb hold the time is increased to infinity. This causes a bunch of stuff to be recalculated which can cause a click." [26]

Firmware 20 for the Axe-Fx III has added ability to use Pre-Delay in Reverb block as a simple echo. Pre-Delay now features Tempo, Feedback and Mix parameters. The pre-delay time has also been increased to 1s.

"These set the decay time relative to the midband time for the low frequencies and high frequencies. If you set the Time to, say, 10 seconds and High Freq Time to 0.1 the high frequencies will decay to -60 dB in 1 second." [27]

Or use one of the types in the Megatap Delay.

Put a Megatap block in front of the Reverb block. Set the type to Reverb Pre-Swell. Run the two blocks in parallel to the main signal chain. [31]