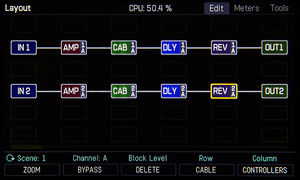 What is the Input block

The Input block is the point where the signal enters the grid for processing by effect blocks.

Position of the Input block on the grid

Axe-Fx II and AX8 — The Input block has a fixed position at the start of the grid.

Axe-Fx III, FM9 and FM3 — The Input blocks can be positioned anywhere on the grid.

The Input blocks are by default linked to the hardware analog input ports.

The Axe-Fx III and FM9 have an extra Input block: Input USB. It gets its signal from USB Outputs 7+8 from a computer.

The Axe-Fx III, FM9 and FM3 have block meters on a page in the Layout view, which indicate the input and output levels per block.

These meters are an extremely handy troubleshooting tool.

Running Input and Output blocks as an effects loop

When running a pair of Input and Output blocks as an effects loop, the blocks don't have to be connected to each other.

Here are the scenarios when running an effects loop:

When using the Input block as the On/Off switch for the loop, it makes sure that no noise will enter the grid if the loop is off. However, this will also cut off tails from effects such as delay when turning off the loop.

The Input 1 block can be configured as a Global Block (on processors which support Global Blocks), the others can't.

Firmware Ares 12.12 and later let you attach this parameter to a controller. This makes it possible to adjust presets for different guitars using a pedal or switch.

Each Input block has its own noise gate settings. On the Axe-Fx III, FM9 and FM3 this includes EMI filtering.