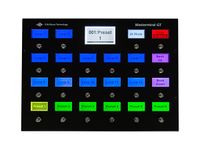 Pedals and switches can be connected directly to parameters (depending on the processor), or through a so-called External Controllers or Control Switches, which can be modified (Modifier menu).

If a parameter is controlled by a switch or pedal, and that pedal or switch is not connected at startup, the processor needs to know what value to use. Disconnecting a pedal that operates as a Volume pedal should not mute the device, for example.

The desired “initial” value can be set in the MIDI menu, through the Initial Value parameter.

Note: This applies only to parameters that have been assigned an "external controller". This does NOT work if:

To accomplish the same in the last cases: engage PC RST in the modifier menu.

Method 4 (use the Multiplexer block in firmware Ares and later):

Method 5 (controle Volume and Wah with a expression pedal with a switch: demonstration)

Display the tuner at heel down position

Expanding the switching options of an FC controller, Axe-Fx III, FM9 or FM3

You can connect external switches to expand the switching possibilities.

The FC-controllers and FM3 allow dual switches per port when using a TRS cable. The Axe-Fx III and FM9 limit each port to a single switch (TS cable).

You don't have to use a Mixer block (available on the Axe-Fx only). Another solution:

The Axe-Fx III, FM9 and FM3 let you to check the ADC (Analog-to-Digital Converter) levels of the pedal ports (Utility menu).

AxeForLemur is a JZML script, licensed by Creative Commons to be a non-commercial, free to use script. The script runs on IOS and Android devices with the Lemur Application from Liine. The Lemur application communicates with the Axe-Fx either through a direct MIDI connection that is connected either through USB or MIDI to the Axe-Fx, or through Wi-Fi to a host computer.

To configure an IOS/Android Patch Editor for the Axe-Fx:

Axe For Lemur is a comprehensive Lemur script based in Quasi XML, Objector based C-Script without pre-processor, structures, pointers etc. The Script is object-based, and exists in the JazzInterface tab object AxeForLemur. Global references exist in this scope.

The preset page (AxeForLemur/dlgProgChange/T1) contains a matrix of MIDI settings for up to four target devices.