Difference between revisions of "Delay block" 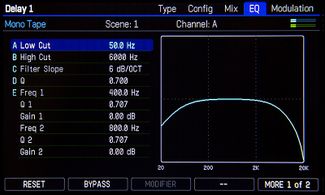 Position of the Delay block on the grid

Just like in analog rigs, there's a difference between the Delay effect positioned before the amp and after the amp, especially when using distorted amp tones. It's up to you. Most people place Delay effects after the Amp block, but delay-before-amp certainly has its own charm.

After the Amp block — this results in cleaner-sounding delays

"Sounds like you have the delay before the amp. This is normal behavior when putting a delay before a distorted (and therefore compressing) amp." source

About the position of the Delay block relative to the Reverb block:

Some Delay types, such as Tape and Ambient, require substantially more CPU than other types.

The Delay block in firmware Ares has these types:

The following blocks in the Axe-Fx III are capable of providing a delay effect:

The Tape Echo mode type is an authentic model which works in mono. It's based on a different algorithm than the Stereo Tape Delay.

Release notes: "Added Tape Echo algorithm to Delay and Multidelay blocks. This algorithm simulates a tape echo where modulation occurs due to tape speed variation. In the Delay block the algorithm is implemented as a two head monophonic tape “deck”. The Time/Tempo parameters set the distance between the record and first playback head. The Ratio parameter sets the relative distance between the record and second playback head as a percentage of the first playback head. The Multidelay block is implemented as a monophonic deck with four independent heads. See the updated manual for full details."

"The algorithm is a single tape with one record head and two playback heads. The signal from each head can be fed back (Feedback) and panned and leveled. Head 1 Time sets the delay time of head #1 when the Motor Speed is 1.0. This is analogous to the distance between the record head and the playback head in a tape deck. As you increase the time you move the heads apart and vice-versa. Whatever the time is set to is the delay time when the Motor Speed is 1.0. As you increase the Motor Speed the tape moves faster so the delay time decreases and vice-versa. The relative position of the heads do not change. Ratio sets the delay time of head #2 as a percentage of head #1. If you set Ratio to 50% then the delay time of head #2 will be half that of head #1. This is analogous to positioning head #2 exactly half the distance as head #1 from the record head. In brief: Delay Time = distance between heads, Motor Speed = tape speed. The LFOs modulate the motor speed. Modulating the motor speed (which changes the tape speed) is a very different effect than modulating the delay time. You can hear the difference between by varying the Motor Speed manually and the Head 1 Time manually. In a typical tape deck the tape speed is not constant. In the days of tape recorders much effort was expended on trying to keep the tape speed as constant as possible. This included periodic maintenance. However, when applied as a delay effect, the variation in tape speed could create a desirable modulation. Tape Echos, in particular, were built to cost points and suffered from considerable tape speed fluctuation. The two primary components of speed variation were termed "wow" and "flutter". Wow arises due to low-frequency variations in the tape speed. This is typically due to variation in the speed of the motor itself and/or eccentricity of the pulleys. Flutter is a high-frequency modulation and arises due to eccentricity of the capstan and pinch roller." source

"Originally all the delays "chirped" when changing the tempo (like many other effects processors). I rewrote the primary delay types so it cross-fades between tempos when you tap a new one to avoid this. The tape delay type doesn't do this so that you can use it as you would an actual tape delay and get all those cool effects by changing the head position or motor speed." source

"The tools are already there for wow and flutter. Wow is modulation below 6 Hz. Flutter is above 6 Hz." "Wow is low frequency modulation. It occurs with records when the hole in the middle isn't perfectly centered or when the record has a warp or due to motor issues. It occurs with tape decks due to the tape being stretched or the motor not being regulated well. Flutter occurs in tape decks primarily due to the capstan being eccentric." source

"That algorithm does not support bit reduction." source

Also known as: backwards delay. It's a type in the Delay and Multi Delay blocks.

You can also use Pitch Crystals or Multi Delay Plex Shift, with Pitch set to 0, and Direction set to: Reverse.

Set Feedback (number of repeats) to 0 for best results. To get multiple reverse-only repeats, send the wet signal through a separate forward delay. source

The 2290/mod delay type has the Phase Reverse parameter set to Right. This will make the delays disappear entirely if the signal is summed to mono after the Delay block (for example when placed before the Amp, or when using a mono cab), due to phase cancellation.

"The original 2290 was a “bit slice” processor. The sample rate was necessarily high because it was a one-bit converter." source

Adjusting the Mix parameter has no impact on the dry signal, unless it goes beyond 50%. This only applies to the Delay block. It's referred to as the 'Mix Law' for the Delay block.

The Mix Law makes it unnecessary to use Delay in parallel routing.

Config is the critical parameter in terms of specifying the base algorithm.

This parameter has been removed in firmware Ares, except in delay types where it changes a type between mono and stereo operation.

There are two ways to set the delay time:

Important: if you use the Tempo method, the menu won't let you enter a delay time in milliseconds anymore. To do that, first set Tempo to None.

The Delay block contains a parametric EQ for the wet signal. Low cut and high cut have adjustable slopes. The EQ stuff is on a separate GUI page with a graphical display.

Setting up an analog sounding delay

"IMO, what people like about analog delays are the narrow bandwidth. The noise, aliasing and crud is debatable. The early analog delays typically used fixed anti-aliasing and reconstruction filters. These filters were designed for the worst-case scenario: maximum delay time. Typically at maximum delay time the clock frequency was only 4-5 kHz IIRC which means the filters need to be < 2 kHz. One popular pedal had the filter at 1.75 kHz. They filters also have a very steep cut-off, typically at least 4th-order but usually 6th order. The slope is given by order x 6 so for 6th-order you would set the slope to 36 dB/oct. For those who are interested there's a paper on DAFX about it." source

A trick is to set this at 61,8, with is also known as The Golden Ratio.

The Drive parameter allows adding distortion to the echoes when using the block before an Amp block.

"Some blocks have clipping simulation, the delay blocks among others. This simulates the input of the delay line being overdriven (like a real analog delay). It also prevents runaway if the feedback is >= 100%." source

Turning up Drive will decrease the level of the repeats.

"If it didn't do that the repeats would get louder until they started clipping." source

The Time Offset parameter (Mono Delay only) allows adding up to 100ms of delay to the right wet signal which can be used for widening effects.

When Hold is activated, the wet input to the block is muted and feedback is set to infinity. This can be used to achieve pad sounds and drone notes/chords.

Hold can be controlled with an external controller.

Note: if the Delay is placed in a parallel row with Mix at 100%, an external controller is attached to both Bypass and Hold, and Bypass Mode is set to Mute In, then the Hold function won't work. Solve this by changing Bypass Mode to Mute Out.

"The tape delay types behave like a real tape and the delays degrade over time." source

"To gain basic understanding try extreme settings in an experiment. Start with a "hot" delay mix of about 50%. The first way you might do this is to set DUCKER ATTENUATION to 80 dB and then adjust the DUCKER THRESHOLD, from the top down—starting at 0.0 and lowering it to hear how ducking kicks in. This will teach you where your threshold is most dynamic. Another good experiment is to set the THRESHOLD all the way down to -80dB and then increase the DUCKER ATTENUATION from 0-dB upwards. This helps you understand what a reduction of "X" dB sounds like. Once you have extreme ducking dialed in, you can play with RELEASE to see how it works. After this, you should be able to set all three controls so they suit your needs." source

This goes up to 200% to create oscillating delay effects.

Prevent cutting off tails when using a pedal

By attaching an external controller (connected to a pedal or switch) to Input Gain, you're controlling the delay level at the input stage. This will make delay trails fade out nicely when muting the delay.

The Ping Pong type lends itself well for checking the stereo output of the unit.

For a lead tone with ambient delay, try this: Stereo Delay, Tempo 1/4, Right Time Ratio 61.8%. You can use these settings with a stereo or mono rig.

If you need an exact number of repeats, use the Band Delay or Tap Ten Delay in the Multi Delay block.

Effect on delay trails only

To add an effect to the delay trails only, not to the direct tone, place the Delay block in a parallel row (Mix at 100%) and add the effect after it.

If you want reverb on the delay trails only, try the Diffusion parameter in the Delay block. This smears the separate delay trails, creating a reverb-like effect.

If the parameter Auto Delay in the Tempo menu is set to “ON,” any delay blocks that are bypassed will become active whenever a tempo is tapped in. This allows you to set the tempo and un-bypass your delay block(s) from a single footswitch. Read this: Tempo 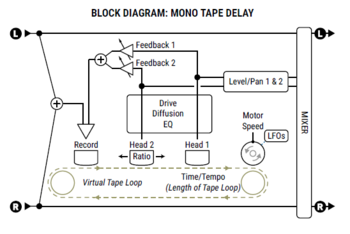