There's no MIDI CC available for X/Y switching on the Axe-Fx II XL/XL+.

Compressor block in firmware Ares for the Axe-Fx III

Firmware Ares for the Axe-Fx III provides these types:

Studio Compressor – the same compressor type as in earlier processors

Pedal Compressor 1 and 2 – "Pedal 2" uses a different algorithm which is smoother and pumps less than "Pedal 1". CPU usage by both types is much less than the "Studio" type

Optical Compressor – based on classic optical tube compressors, famed for their smooth sound. Use it before the Amp block to smooth out your licks and increase sustain, use it after the Amp block for instant “Hit Record” sound

Tube Compressor – based on classic tube compressors like the Altec Lansing 436C. Since this type uses “variable mu” processing it may add subtle, and possibly desirable, distortion to the audio

Analog Compressor – natural soft-knee response, capturing the vibe of the classic compressors of the 70s and 80s

(Axe-Fx II) "Optical 1 uses a full-wave rectifier as a detector (peak detector). Optical 2 uses a true RMS detector. The LA-2A and many other compressors use rectifiers as detectors because it's easy and simple. Technically true-RMS detectors are "better" but they are difficult to implement in analog hardware. Whether or not true-RMS is better in actual real-world applications is debatable. There are those that claim that true-RMS detectors more closely replicate the natural compression behavior of the human auditory system. Peak detectors respond more rapidly to transients while RMS detectors have a smoother behavior. The only way to know which you like better is to try them." source

(About the optical con compressor) "It's not an "LA-2A" but it can sound like one. It's a generic optical compressor that can be adjusted to sound like a variety of compressors. It has adjustable attack, release and compression." source

AustinBuddy: "I've been having great 1176-style success with the newer Analog Compressor model in the Compressor block. Threshold around -20db, ratios of 4:1 to "Infinite" for squash, add about 3-4 db make-up gain." source

About the Altec Lansing 436C compressor

More in the Owner's Manual

Position of the Compressor block on the grid

In traditional rigs the compressor pedal goes between guitar and amp. You can do that in your preset too.

Placing the Compressor block after the Amp block makes it interfere less with the amp dynamics. When doing this, set its input to Line instead of Instrument (Axe-Fx III: n/a).

"The Dynamics knob in the Amp block does the same thing as the Dynamics mode of the compressors so you can save a block that way." source

"The Output Compressor is a simplified version of the compressor block." source 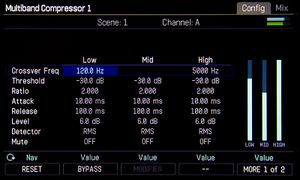 Some processors have a separate Multiband Compressor block.

The parameters are explained in the Owner's Manual.

In firmware Ares, a Threshold parameter has been added to all types. In existing presets containing a Compressor type that didn’t have a Threshold yet, the value is set to -60. Adjust if necessary.

"The Threshold is the input level at which the output starts to compress as given by Ratio control."

"If defaults to all the way down on old patches so that it doesn't change the sound of them." source

"Levels can be and are frequently above 0. Any compressor that has a max level of zero is not calibrated in dBu."

Attack and Release vary with program material as a percentage of the set values.

Compressors are used mostly as a 100% wet effect. But there are a few compressors with Blend or Mix controls. Use the Mix parameter in the model.

You can use the signal that enters the grid to feed the compressor, even if the compressor block is placed further upon the grid, through the Sidechain Select parameter.

"Pedal compressors typically have very long release times so the time is scaled by 10 for pedal mode. The time in studio mode is accurate to within a microsecond." source

"The times are the classic "time constants" for analog circuits, i.e. the time it takes for a signal to settle to 37% of it's final value (e^-1)." source

This boosts the high frequencies prior to compression and then lowers them after.

Filter is a low-cut filter which can be used to tailor the response of the various compressor types to different material.

In firmware Ares, the Filter parameter has been replaced with EQ-ing tools.

The default Lookahead value is 0.

The “Fast RMS” Detector type in the Studio Comp mimics the fast detectors in classic rack-mount compressors. It uses less CPU than the other detectors.

"I use "Analog Compressor" for Keeley sounds. It works great! Because I play vintage output guitars, I like to boost the level going in by adjusting the output of the input block before it. You can try "Auto Att/Rel", or use the published "classic" Keeley recipes*. Personally, however, I prefer a faster release, in the neighborhood of 75ms or less.

"The PEDAL 1 type in the AX8 is comparable to the CS1/2/3. The COMPression knob is equivalent to the SUSTAIN knob on the Boss pedal. Release is not sustain. Leave it at the default setting. When using this effect, I like to increase level before the compressor. One way to do this is to increase the output level of the noise gate on the input block." source

Using the compressor as a limiter

There's no dedicated brickwall limiter in the unit, but the compressor can be used as such.

"Setting the RATIO to “INFINITY” turns the compressor into a “limiter,” reducing any level above the threshold to the threshold, applying a sort of “ceiling” or “brick-wall limiting” above which nothing can rise."

From the Axe-Fx III manual:

"Pumping is an effect that occurs when a sudden strong peak causes a compressor to reduce levels such that the entire signal audibly dips and then returns. The event that triggers pumping might be brief, and can be in any part of the frequency spectrum. To reduce pumping caused by low or high end spikes, you can use sidechain filtering to make the compressor less sensitive to such peaks. Very fast and very slow release times tend to make a compressor seem more resistant to pumping, but can bring issues of their own. Another possibility is to switch to a multiband compressor, which handles lows, mids and highs individually. Now, it cannot go without saying that pumping can also be used as an effect in itself, as when a kick drum is set up as a sidechain source to give electric guitars a bouncing sound common in dance and industrial music."

"De-essing can be done by adjusting the side-chain EQ in the compressor block." source