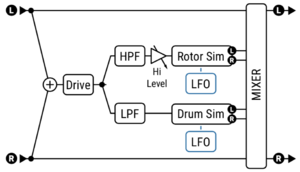 What is a rotating speaker

(Wikipedia) "The Leslie speaker is a combined amplifier and loudspeaker that projects the signal from an electric or electronic instrument and modifies the sound by rotating the loudspeakers. It is most commonly associated with the Hammond organ, though it was later used for the guitar and other instruments. A typical Leslie speaker contains an amplifier, a treble horn and a bass speaker—though specific components depend upon the model. A musician controls the Leslie speaker by either an external switch or pedal that alternates between a slow and fast speed setting."

Reverb.com: The continuing story of the Leslie rotating speaker cabinet

Position of the Rotary block on the grid

Many players put the Rotary block after the Amp block for stereo output.

Alternatively, run the Rotary in parallel to a Cab block.

The Rotary block is stereo by default. You can change to mono output by setting Mic Spacing to 0% (or setting Stereo Spread to 0%), or by summing its output to mono, i.e. by placing it before the Amp block.

Spread values beyond +/-100% increase the apparent image beyond the stereo field.

Part of the charm of the Rotary is switching between speeds. The effect will automatically ramp.

To switch between two speeds:

Braking the rotary means that the speed is slowed down until it stops. The Rotary block does not provide a built-in brake.