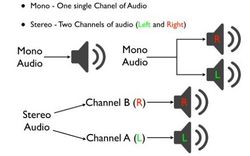 About mono and stereo output

Effects sound gloriously in stereo. However, when it comes to FOH sound, stereo separation may not always translate well to a live audience. People seldom are in the right spot to hear both sides equally well. Also, many PA systems are mono.

Read this: Connections and levels

A simple method to switch between mono and stereo, is to set one channel in the Cab block to Stereo and another channel to mono.

Blocks such as Flanger, Chorus and Phaser are mono by default. Use the parameter LFO Phase to switch these to stereo.

Everything before an Amp block or Drive block will always be summed to mono. To keep a stereo signal before the Amp block stereo, use two Amp blocks if the device supports this, and adjust Input Select and Balance to make each block handle one side of the signal.

Phase cancellation — When two 100% identical audio signals of opposite phase are merged, the result is complete silence.

You need to be careful of phase cancellation and comb filtering when summing a stereo signal (preset) to mono, if it contains effects which invert phase or shift time alignment.

To avoid phase cancellation when summing a stereo signal to mono: