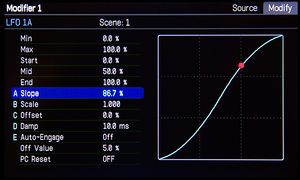 Internal Controllers, including Tempo, are regarded as a block in the Axe-Fx III, FM9, and FM3, albeit not a block that can be placed on the grid. This block has four channels

External controllers — Gateway between the FAS device and another external hardware device such as a pedal, switch, or MIDI device.

Internal controllers — Generate data within the FAS device, which in turn change parameter values. Envelope follower, LFO, and ADSR are examples of internal controllers. Use the Control menu to adjust their settings, per preset.

Improvements in firmware Ares and later

In addition to the differences noted above, the current firmware:

Internal controllers generate control data without the help of an external device.

Firmware Ares and later provide internal controllers with 4 different sets of settings per preset, through Channels. Also, some of the "ambient" blocks, such as the Multitap Delay block, have a built-in envelope follower on the input, enabling swelling effects without having to use a controller. 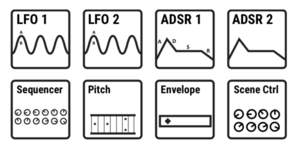 5 internal controllers generate control data without the help of an external device:

Release — The time it takes to drop from the sustain level to silence after being released.

Firmware 19.01 and later for the Axe-Fx III adds a Type control to ADSRs. The default, EXPONENTIAL, is an analog-style where the ADSR has an exponential attack/decay. LINEAR selects a linear attack/decay.

Envelope Follower — converts input levels to control signals, responding variably to playing dynamics. In comparison, the ADSR envelope generator always creates the same control signal, but only triggers when you play hard enough. Use Envelope to create an Auto Wah: attach Envelope to the Control parameter in the Wah block and hit the note hard for more effect, hit it soft for less effect

Envelope and Pitch only detect signals at the front input of the Axe-Fx II and AX8, and Input 1 left rear (Axe-Fx II). The FX8 lets you adjust this for POST-only setups (Global menu). The Axe-Fx III, FM9, and FM3 have expanded possibilities and their Pitch block(s) have their own detectors.

You can attach a controller to the effect's Bypass (Mode) parameter. This will not change the bypass mode, but it'll act as an On/Off switch for the effect block. The side-effect is that you can no longer engage or bypass that effect manually by editing the preset. The On/Off state is determined by the external controller, exclusively.

You can make Auto-Engage kick in depending on the pedal's position, or the speed with which you rock it. "Position" depends on the OFF VAL setting.

Another alternative is to use the approach shown in the Devy Townsend factory preset, where the hiccup when engaging is avoided.

For example, you have an expression pedal assigned to a Level parameter. You set the pedal halfway and then switch presets. PC RST determines whether the new preset maintains the pedal position and sets Level accordingly, or sets Level at the stored value of the preset, regardless of the pedal's position. If it's ON, the stored value will be used, until the pedal is moved.

Damping provides separate Attack (up) and Release (down) parameters. This means that damping up and down can be set at different times. Also, the maximum damping time has been expanded.

Also, in firmware 19.01 and later for the Axe-Fx III (FM3 and FM9 followed) you can select between:

Under some circumstances, a slow or medium rate combined with an internal controller may cause “zipper noise”. Increasing the rate will reduce the noise. Note: higher update rates increase background CPU usage and should only be used when absolutely necessary.

Turning up the Scale will ensure that the Control value reaches maximum even if the pedal doesn't. [4]

Control Switches are documented in the Owners Manuals of the FC controllers, AX8, FM3, and FM9.

The Control Switches also let you transmit MIDI at will by pressing the switch when using an FC-6 or FC-12 or FM3. This doesn't depend on a preset change or scene change. Up to 4 MIDI commands (PC or CC) can be transmitted.

These are accessible in the Controllers menu and/or Performance Pages, and can be used as modifiers for real-time manipulation of parameters from the front panel, without needing an expression pedal, MIDI device, or other controllers.

Current firmware lets you assign a controller to a parameter and apply that either to a single channel or to all channels in the modifier menu. This allows flexible use of a modifier, especially across scenes. Note that you can only select "single" once, meaning that you can NOT assign a separate controller to each of the four channels.

Multiple controller settings within a single preset are possible, because the Control block has 4 channels.