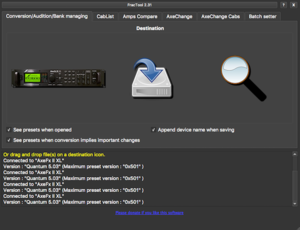 FracTool manages presets and cabs and does a lot more. It complements Fractal Audio's own editors. It works with and without a connection to the processor.

FracPad III is donationware. Don't forget to make a donation if FracTool helps you accomplishing things.

FracTool is constantly being improved. It will automatically update.

For a list of its current features, check the download thread above. Below is a shortlist of features.

Conversion of presets between FAS devices

Check the forum thread for an actual list of features

Same support as for the Axe-Fx II and more.

FracTool can convert FM3/Axe-Fx II/XL/XL+ presets and AX8 and FX8 presets, to make them load in the Axe-Fx III. Backwards conversion is not supported.

Same support as for the Axe-Fx III.

FracTool can convert Axe-Fx III/II/XL/XL+ presets and AX8 and FX8 presets, to make them load in the FM3. Backwards conversion is not supported.

FracTool supports the FX8. There are limitations because of differences in the architecture of the FX8: