Comparing the FM3 and FM9 and Axe-Fx III

See the Product Comparison Table for a comparison of the units.

"The entire product line was conceived years ago. The goal was to maximize the number of parts shared between products. The footswitch PC boards do three switches each. An FM3 has one board. An FC6 has two. An FM9 has three and an FC12 has four. All products use the same LCDs, encoders, side plates, etc., etc. This reduces cost and repair inventory. The FC6 and the FM3 are basically the same enclosure. The FC12 and FM9 are basically the same enclosure. This isn't a huge market. Margins are thin so you have to think of ways to minimize development and product costs. Parts bin methodology is the route we took on this generation." [1] 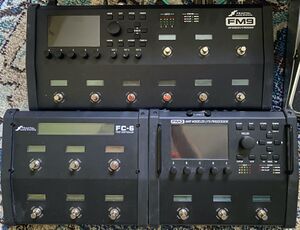 The Blocks Guide shows the differences in effects per product, including the number of instances per block. Here's the wiki list.

"The core modeling technologies are the same, but not all features are present on the lighter platform. For example, the FM3 doesn't have input dynamics or bias trem." [3]

"The changes to the Megatap block have not been ported to the FM3 at this time. They may or may not be ported at some future date." [4]

(comparing the FM3's amp modeling to the Axe-Fx III) "They are the same quality. Certain features were removed to allow the algorithms to run including the bias tremolo, input dynamics processing (...)." [5]

(FM3) "We removed all the superfluous stuff (bias tremolo, dynamic presence/depth, etc.) in order to get the core amp modeling to run on the slower processor." [6]

(FM3) "The Axe-Fx III contains various algorithms that allow you to enhance the amp modeling that don't exist on a real amp. I.e. dynamic presence/depth, input dynamic processing, etc. These were removed to allow the core amp modeling to run on the lower-powered processor." [7]