(Axe-Fx Standard/Ultra) “The audio processing is the highest priority thread. When there is time left the GUI thread is run. If CPU usage is high there simply isn't enough time to run the GUI at the normal refresh rate so the thread reduces the refresh rate.” source

(Axe-Fx II) “The CPU simply monitors the time between frame interrupts and if it predicts it doesn't have enough cycles left to process the next effect in the grid it aborts and flashes a warning." source

(Axe-Fx II) "Audio processing is the highest priority. Once you exceed 90% that remaining CPU is divided up between the display, expression pedals, MIDI, etc., etc. Something has to give." source

(Axe-Fx II) "The audio will always switch quickly. The display may take a while to switch since the audio processing takes priority. If CPU usage is high the display will take a little while to update." source

(Axe-Fx II) "The LCD is low priority. If CPU usage is high then the screen refresh rate drops because priority is given to the audio threads." source

CPU usage up to 80% is safe. Beyond that, the COPU meter on the hardware and in the editor will turn red as a warning.

CPU usage up to 80% is safe. If CPU usage gets too high, the audio will be muted and a warning appears. If adding a block will get you in the danger zone, the FM3 will warn you.

The Delay block on the FM3 shares a core DSP with amp modeling. 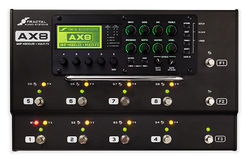 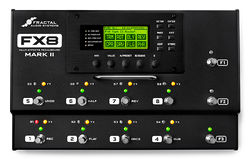 (AX8) "If I am reading these posts correctly, it sounds as though folks seem to think that an effects CPU usage is a static thing. That is, if I use a compressor in my preset it uses X% of the CPU. This is not actually how it works. CPU usage fluctuates as you use the device. That is, depending on what an effect is doing, or how it is configured, the CPU usage will vary dynamically. The AX8 monitors and manages the CPU usage. This is done for two reasons: (1) If CPU load gets too high, then the audio is effected (2) If CPU load gets too high, the front panel (footswitches primarily) is adversely effected. The performance of preset, scenes, effect bypass, etc. starts to become effected. A lot of development time has been put into reducing these effects, but it is impossible to eliminate them entirely. Rather than just allow the AX8 to behave in an undesirable fashion, the unit manages the CPU load by disabling effects. The biggest offenders are disabled first in an effort to reduce the number of disabled effects. This typically means the REVERB block is the first effect disabled. The trick is to build your presets in a manner in which this does not happen when you are playing live. In other words, test your presets out and give yourself some head room for last minute changes whenever possible." source

(AX8) "Lots of different parameters, controllers, etc. can cause variation in your CPU utilization. Also, playing your guitar will bump your CPU as well. So, if you are looking at the utilization while your input is quiet, then you should plan on a 2% - 3% increase when you start playing. The cutoff for CPU is 90%. This cutoff prevents audio glitches, and provides enough CPU for low priority activities." source 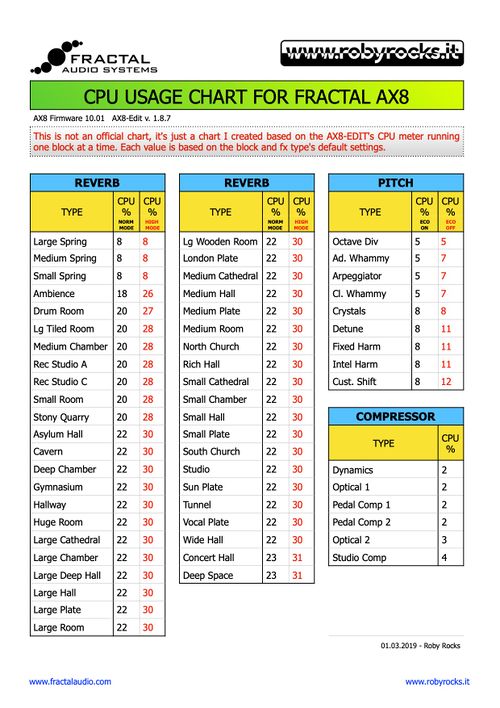