"The LCD is designed for viewing angle and sunlight readability. It's not designed to watch movies in dark conditions." source

"The Axe-Fx III uses a battery for system data backup. Whenever the user changes any global data that data is flushed to battery-backed storage. We use battery-backed SRAM instead of EEPROM or FLASH because it's very fast and unlimited endurance. EEPROM is very slow and there's a risk that the user turns the power off before the flush is finished. FLASH has limited endurance (as well as being slower the SRAM) and there's a risk of wear-out. The battery should last 10 years under normal conditions and is user replaceable." source

"All I/O is reference quality and razor flat. Check your I/O settings." source 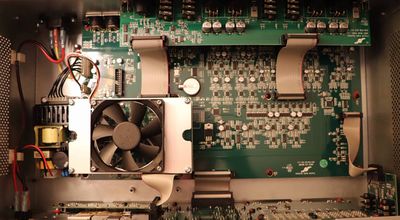 "TI makes the most powerful DSPs, by far. The only DSPs more powerful than the one in the Axe-Fx III are the family members with more cores, but they're too expensive for a consumer product." source


"It's the equivalent of 15 inches. Most modeling products have latencies in the range of 1-2 ms which is roughly equivalent to 1-2 feet away from the speaker. Our products have less latency than most, if not all, competing products as that was a design goal from day one. The equation is ~1 ft per millisecond of latency." source

"The converters are the limiting factor. It's already way faster than anything else." source

"The number of block before or after does not make a difference." source

A USB driver is required for Windows operating systems.

No driver is required for Mac operating systems.

Note: when using a USB-C to USB adapter on a newer Apple computer, plug the USB-C adapter into a the port on the Mac first, allow it several seconds to “wake up” and then connect a USB cable and Axe-Fx III into the adapter. 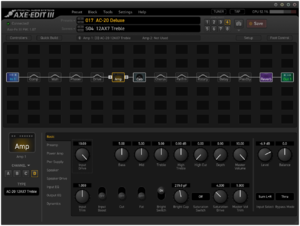