Always consult the official Owners Manuals and Guides first.
Content is currently being reviewed to make sure you have the most complete and up-to-date information

Read more about the Amp block. 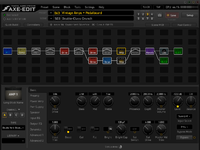